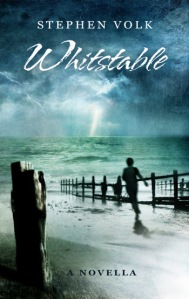 As most of you horror aficionados know, 2013 is the centenary of one of the finest actors Britain has ever produced – Peter Cushing. There will be many celebrations to mark the event, and Spectral Press is joining in by publishing a novella, called Whitstable by Stephen Volk, the writer mostly known for his groundbreaking drama Ghostwatch and the recent celluloid chiller The Awakening. The novella is set, as the title implies, in his beloved home town of Whitstable, situated on the Kent coast. Although there are no supernatural elements present in the story, the monsters Peter fights are all too real.

There will, of course, be a campaign to promote its release in May, including a competition to be run in conjunction with The Classic Horror Campaign, wherein one lucky person will win a signed copy. Also, internationally renowned magazine Fortean Times will be running a feature on Peter Cushing by Mr. Volk, with reference to the novella including a short extract from it. In tandem, Fortean Times  will also be holding a competition/giveaway, with signed books up for grabs.

In view of the likely popularity of the book, we here at Spectral Press have decided to put the limited hardback edition (signed and numbered) on pre-order now, rather than later, so people can assure themselves of obtaining a copy of this absolutely wonderful book. We are also offering, in conjunction with Cosmic Hobo Productions, a special deal which includes a copy of the 2CD set of Peter narrating his memoirs of the Hammer years. Below are two price points: one for just the book only and the other for the book and 2CD offer.

All prices include postage and packing.

Look forward to hearing from you!

6 comments on “Whitstable: news and pre-orders”