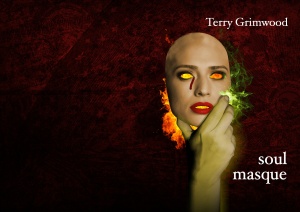 So, here it is folks, the first review of Terry Grimwood’s Soul Masque, written by Geoff Nelder – we reproduce it here in full:

“Ali Smith, on giving advice to the competitors in the Bridport Prize a while ago said, “I like to see a beginning, middle and end, but not necessarily in that order.” I’m reminded of that sage advice with Soul Masque opening with an epilogue! Like an inside-out matryoshka doll more of the story is told backwards. Normally, I hate back-story tales but it works here with macabre relish.

The end at the beginning is cunningly crafted such that the reader begs for the real start to see how the bizarre finale is reached. And that beginning is no disappointment. In true Terry Grimwood style, we are lured rapidly by an account of how a sane individual becomes snared in the drug-toting underbelly of society.

‘They took (the morphine) away once his broken bones were healed. You can confiscate the cure, but you can’t take away the Need…’ so it continues – the hurt that obliges the reader to be drawn into the abyss of another Grimwood noir tale.

White spindly creatures the stuff of nightmares. ‘Ichor streaks the windscreen.’ Nasty, compelling. Read on, Nelder. Grim yet a smile with the anagram – ‘Satan’s little helpers’.

Unexpectedly among the terror we are grounded by London’s Congestion Charge – ha, and yet not so ha. London isn’t the same any more, especially warehouses. Unnaturally, supernaturally, the ending is a prologue and it makes sense, if you’d not already worked it out.

A novella of S&M –the 1980s kind with traditional bondage but with an extra element you won’t find anywhere else. You have to take pleasure from this story, or they will come for you, too.”

Many thanks to Geoff for this! More soon!