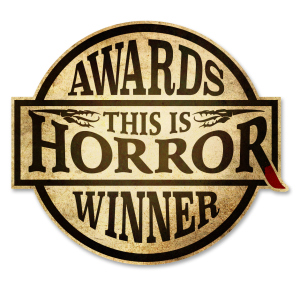 This Is Horror Awards logo ©2015 This is Horror

The list of the rest of the nominees can be seen HERE.

We here at Spectral are particularly proud of this book and extremely pleased with the reception it has received – for it to be nominated is testament to the quality of the stories within its covers.

THE SPECTRAL BOOK OF HORROR STORIES (All prices include postage)

It’s a warm sunny day here at Chateau Spectrale and, to make it even sunnier, it gives us immense pleasure to be able to announce some really BIG news:

Stephen Volk’s highly-acclaimed novella Whitstable, released to coincide with the centenary of Peter Cushing’s birthday last year on 26th May, has been nominated for a British Fantasy Award in the Best Novella category. We here at Spectral are exceptionally thrilled at this – it’s an exceptional piece of work, one which has won praise from all quarters for its emotional depth and sensitivity, and also acclaimed for its brilliant portrayal of the great man himself. We still have copies available in the Spectral Shop (see menu bar at the top of the home page), so why not buy a copy today and see for yourself why this has become one of Spectral’s bestselling titles.

We are ALSO thrilled and excited to announce that, for the third year running, Spectral Press itself has received a nomination in the Best Small Press category of the same Awards. We couldn’t be more pleased with this nomination – once again, it shows that all the hard work we put in here has been more than worthwhile. We are slowly conquering the universe one step at a time.

Another Spectral connection, which I was reminded about, is that the cover artist of Whitstable, Ben Baldwin, has also been nominated in the Best Artist category. Would be great to have a triple whammy! =)

Talking of Stephen Volk, it was announced last week that there was to be a ‘follow-up’ novella from him, Leytonstone, the second volume in the Dark Masters trilogy, all of which will be published by Spectral. We are greatly pleased that Ben Baldwin, creator of the cover artwork for Whitstable, will be bringing his skills to the cover image for the new work. He will also be doing the same for Mark Morris’ Albion Fay novella.

Both novellas will be available next year.

It’s that time of year when the British Fantasy Society announces its shortlist for the awards to be given out by the Society at FantasyCon, being held in Brighton once more, at the Royal Albert Hotel, in September. All nominees on the shortlist have been voted for by the membership and will now go on to be judged by jury.

And yes, that badge immediately above means exactly what it’s meant to tell you: we are very pleased to announce that Spectral Press have picked up two nominations in this year’s awards. They are:

Paul Finch’s tale of misplaced medieval hubris is up for the Short Fiction award, alongside works by Simon Bestwick (whose own Spectral chapbook will be out in June next year), Michael Marshall Smith, Adam Nevill and Angela Slatter. Don’t forget, too, that Paul’s story is being reprinted in the Paula Guran-edited Year’s Best Dark Fantasy & Horror: 2012, due out this July.

The second nomination is for Spectral Press itself in the PS Publishing Independent Press Award, where it’ll be up against Chomu Press (Quentin S. Crisp), Gray Friar Press (run by Gary Fry, author of The Respectable Face of Tyranny, published by Spectral last month) and Newcon Press (Ian Whates).

A full list of the nominees for this year’s awards can be found here. FantasyCon 2012 is due to take place over the weekend of 28th – 30th September.

We’ve put in a lot of hard work over the last seventeen months to bring our readers the best in top quality ghostly/supernatural fiction and, although in all honesty our main motivation is to give back to the genre we love what we’ve got out of it as a mark of gratitude, we’d be lying if we said that these nominations haven’t put big grins on our faces and validated all the reasons why we set Spectral up in the first place. It’s nice to see that hard work being recognised and, even if we don’t win, we can take a lot of heart and encouragement from just being on the shortlist. So, thanks to everyone who nominated us!

As a quick aside, let it also be known that FantasyCon 2012 will see the launch of John Llewellyn Probert’s The Nine Deaths of Dr. Valentine, with a reading, a signing and free wine. A specially-signed edition of the hardback plus a pair of white gloves as worn by John in his author photo for the book will be featured in the FantasyCon Raffle. It’s an event NO T to be missed!

See you in September!